India After Gandhi – The History Of The World’s Largest Democracy 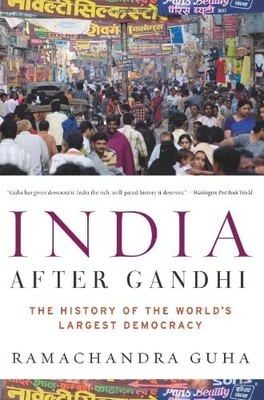 India After Gandhi: The History Of The World’s Largest Democracy, published in 2007, takes an in-depth look into the history of this country, since its independence from the British Raj in 1947. The author has skillfully reconstructed the last six decades of India’s past. Guha explains how the country was divided by religion, caste, language, and yet it established itself as an independent, united, and democratic nation.

India After Gandhi: The History Of The World’s Largest Democracy studies the conflicts and glories that the world’s largest and least likely democracy has gone through. This book focuses on the integration of Muslims and Hindus post-partition, the defeat against the Chinese, and the extraordinary execution of elections. Guha has also given fresh insights into the life of India’s first Prime Minister, Jawaharlal Nehru. This book also focuses on Indira Gandhi’s resolve lead to the liberation of Bangladesh. Furthermore, the book speaks of the dark days of the Emergency, which lead to the abolishment of civil liberties and judicial independence. In addition to analysing well-known personalities, Guha has also covered the lives of farmers, musicians, tribals, and workers.

India After Gandhi: The History Of The World’s Largest Democracy presents the contrasting picture of India, and shows readers how India’s strength lies in its democracy. The book has been meticulously researched, and beautifully written. It won the Sahitya Akademi Award for English in 2011, and has been chosen as the Book of the Year by The Wall Street Journal, The Economist, and Outlook.